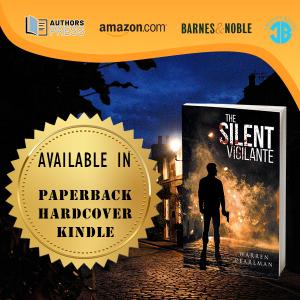 As long as a truth seeker never sleeps, justice prevails, and will always be.”

PRESS RELEASE | LA BOOK FAIR 2022
encapsulated in twenty-nine chapters. A vigilante, which is a member of a volunteer committee organized to suppress and punish crime summarily, extends the attainment of justice, particularly through a self-appointed effort.
Moreso, Pearlman expands the idea of justice in a simple question: How can justice be availed if police institutions have lacking justiciable efforts?

The book develops on the tragic experiences of Frank Young: his family, his wife, and his ultimate pursuit of justice. Frank, the main character, loses his family in two separate accidents. Due to police’s lack of efforts to find the cause of accidents, Frank takes matters into his own hands. His efforts deliver him to entering the military where he meets a weapon’s dealer, buys some untraceable revolvers and a silencer. After returning from the army, Frank Young became a policeman. He still pursues being a vigilante, but as a policeman dedicated to his job, he also helps some people along the way.

Along the way, he meets some people that need more help than he does and assists them in getting their lives back together. To his surprise, Frank finds out that a lot of people support what he’s doing and the path he has taken. With a
surreal mixture of fact and fantasy, Pearlman intended to create suspense in which readers allow themselves to be in every scene.

Book copies are available at Amazon, Barnes & Noble, and other online book
retailers.