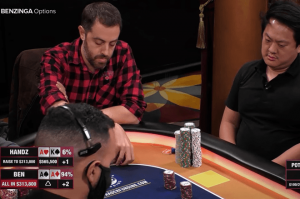 Benjamin Lee and Danny ‘Handz’ Oren play out a record-breaking $634,000 hand of poker. 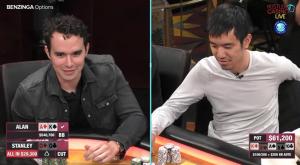 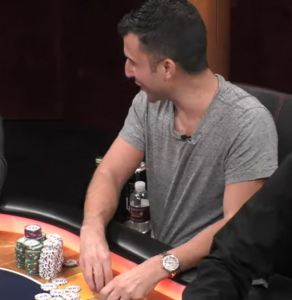 Ryan Feldman, the producer of Hustler Casino Live, made a special appearance in the game.

LOS ANGELES, CALIFORNIA, UNITED STATES, April 22, 2022 /EINPresswire.com/ — If you are a poker fan, you’ll probably know about Hustler Casino Live. The show streams live 5 days a week from the Hustler Casino in Los Angeles – and already has hundreds of thousands of viewers who tune in religiously to watch what can only be described as blood sport.

On the April 15 episode, however, the carnage reached new heights. With regular fan favorite Garrett Adelstein missing from the line-up, the table comprised players such as venture capital investors Alan Keating, Benjamin Lee and Danny ‘Handz’ Oren, philanthropist Bill Klein, and DoorDash co-founder Stanley Tang, who at 28 became one of the youngest billionaires in history.

Lee, the managing partner of venture firm Ixora, was the biggest winner, breaking the show’s record (previously held by Adelstein) by taking home $516,000 in profits. He also won a record-breaking $634,000 pot, with pocket aces against Oren’s ace-king, en route to his historic night. Lee and Oren were the two biggest stacks on the table, and Oren had moved all-in following Lee’s $90,000 pre-flop raise.

Cryptocurrency influencer Wesley Flan also had a big night, continuing his red-hot run on the show. He had lost his $170,000 buy in, but reloaded for $50,000 – which he borrowed from Lee – and ran it up to almost $400,000 by the time the cameras went off the air. The show’s producers said that Flan eventually cashed out over $500,000, as play continued even after the end of the stream.

On the other end of the spectrum, Keating, Tang, Klein and financial advisor ‘Tiger’ all lost over six figures over the course of the 6-hour show.

Despite the ban on online poker enacted by the federal government in April 2011, the game continues to be hugely popular. There are an estimated 60 million people in the United States who play poker online, according to the World Series of Poker.