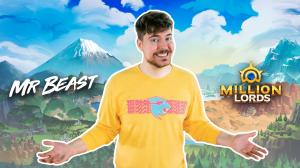 LYON, FRANCE, June 8, 2022 /EINPresswire.com/ — The independent studio Million Victories is proud to announce that one of the biggest youtuber and content creators in the entire world, MrBeast, is an active part of its dedicated player community. As of today MrBeast has more than 96 million Youtube subscribers on his main channel. After a single season, MrBeast, ranked 6 out of tens of thousands of players.

Million Victories was thrilled to find out that MrBeast recently discovered Million Lords and is passionate about it. After his successful first season he decided to engage even further into Million Lords and organize his own contest to drive the competition even higher!

“I love this game, I love war games like this. And I want the best players to go against. When I’m in Diamond league in a couple of seasons, I want to have a crazy season and pay the top players. I’m gonna give first place $10,000. Second place $5,000. And third place $3,000. That way, I have some real competition. Spread the word” says Mr Beast.

MrBeast contest will begin on July 12, 2022 and end on July 28, 2022 for players in diamond league on the American server. Million Victories team thinks that it is the perfect opportunity and time for competitive players and for strategy enthusiasts to discover Million Lords through a competition with a big reward.

Million Lords also confirmed its prime position in its key markets, the US, France, the UK and Germany with thousands of new players every day.

“The fact that a true gamer like MrBeast discovered our game, loves playing it and shows so much commitment, definitely shows that our creative vision and gameplay mechanisms are very engaging. We are proud to develop such a unique game and bring this excitement to our community and new players all over the world.” says Benoît Ducrest, CEO of Million Victories.

Million Lords is a real time online multiplayer strategy game available for free on Android and iOS. Million Lords is all about city conquest, warfare, kingdom empowerment and tactical alliances with others.