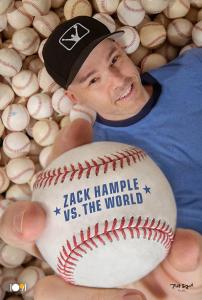 Zack Hample vs. The World Poster 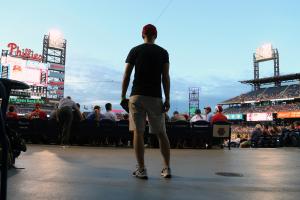 “Zack Hample vs. The World” Benefits A Harleysville Baseball Charity And Comes Ahead Of The Reading Fightin Phils Hosting Zack Hample Day This Sunday 4/10

PHILADELPHIA, PA, USA, April 6, 2022 /EINPresswire.com/ — Jeff Siegel Films is pleased to announce the release of the feature-length (95 minute) documentary “Zack Hample vs. The World.” The film is being distributed globally by 1091 Pictures, a Chicken Soup for the Soul Entertainment, Inc. (Nasdaq: CSSE) company. It is currently the top sports documentary on the Apple TV/iTunes digital storefront.

Zack Hample isn’t a professional baseball player, but for decades he’s been racking up stats as if he were. The legendary “ballhawk” has attended thousands of Major League Baseball games across every ballpark in the country on his journey to snag 10,000 baseballs from the stands. Along the way he’s found himself at the center of some of the game’s biggest moments and controversies – including Mike Trout’s first home run and Alex Rodriguez’s 3,000th hit – and has undeniably become baseball’s most celebrated and infamous fan. The film takes an intimate look into Zack’s astounding, true-life story that must be seen to be believed.

While Zack has been frequently covered in the media over the years, this documentary tells the complete and untold story of who Zack really is outside of the ballpark and why he has devoted so much time and energy to becoming such a phenomenon. In recent years, Zack has become an internet sensation with over a half million YouTube subscribers and over a million followers across social media. At a time when baseball is poised to return from its first lockout since 1995, the documentary is a love letter to America’s pastime, a celebration of fandom, and a poignant reminder that there’s nothing quite like being at the ballpark.

The film – a passion project, 14 years in the making – was produced and directed by Jeff Siegel, an Emmy award-winning filmmaker and Bucks County native. The seeds were planted Siegel met Zack at a Phillies game at Citizens Bank Park in 2008 – a few months before the Phillies won the World Series (which is chronicled in the film by Siegel’s narration from the perspective of a lifelong Phillies fan). Much of the documentary was filmed at a number of other games in Philadelphia over the years, including along Zack’s home stretch to snag his astounding 10,000th lifetime baseball in 2017.

Coming up this Sunday, April 10, the Reading Fightin Phils are hosting Zack Hample Day at FirstEnergy Stadium in Reading where the noted ballhawk will be in attendance and clips from the film will be screened.

A portion of all proceeds from the film will be donated to Pitch In For Baseball & Softball, a charity based in Harleysville, PA that Zack Hample has worked closely with for over a decade, providing equipment to underserved children and communities all over the world.

Jeff Siegel Films is the boutique production company run by Emmy award-winning filmmaker Jeff Siegel. Jeff has worked closely with clients including Billy Joel, ESPN, Major League Baseball, Legendary Pictures, and the Pittsburgh Steelers and has collaborated with talents such as Robert Redford, Rob Reiner, Tom Brokaw, Doris Kearns Goodwin, James Taylor, Clancy Brown, Ed Burns, Keith Olbermann, and Kevin James. Among the myriad of projects Jeff has produced, his career highlights include two ESPN Films “30 For 30” shorts: Holy Grail: The T206 Honus Wagner (2013) and The Deal: Alex Rodriguez to the Boston Red Sox (2014), as well as the music video for James Taylor’s Angels of Fenway (2015). Jeff directed, produced, shot, and edited the documentary specials Billy Joel: New York State of Mind (2017) and White Hot Spotlight: Billy Joel and the Greatest Arena Run of All Time (2019), for which he won seven New York Emmy awards. He developed and produced (as well as shot and edited a large portion of) the 4-part Netflix Original Documentary Series This Is A Robbery: The World’s Biggest Art Heist (2021) alongside Barnicle Brothers and Tribeca’s Jane Rosenthal and Berry Welsh. The series was named by Variety as one of “the best documentary series of 2021”. For more information, please visit: JeffSiegelFilms.com

1091 Pictures, a Chicken Soup for the Soul Entertainment (Nasdaq: CSSE) company, is a modern distribution partner for independent film and series owners based in New York and Los Angeles, offering content licensing and delivery to over 100 destinations in over 100 countries. The company represents over 500 filmmakers and distributors and has amassed over 150 award nominations, including two Academy Award® nominations, an Emmy nomination, a Grammy Award for Best Music Film, and over a dozen Spirit Awards nominations. Leading the way in digital distribution, 1091 Pictures helps its clients navigate the streaming landscape, providing marketing resources and valuable insights through partnering with its parent company’s new technology platform in development, Streamwise. 1091 Pictures’ diverse slate of releases include NYT Critic’s Picks such as The Ghost of Peter Sellers and Grammy-Award Winner Linda Ronstadt: The Sound of My Voice, riveting sports stories such as A Kid From Coney Island executive produced by Kevin Durant and featuring Stephon Marbury and Red Bull’s The Dawn Wall, audience favorites such as The Last Blockbuster, groundbreaking documentaries such as Close Encounters of The Fifth Kind and The Phenomenon, which reveal the latest intelligence on UFOs, and indie film hits such as Academy Award® Winner Taika Waititi’s Hunt for the Wilderpeople, Spirit Awards-winner Christine, and the knockout comedy The Overnight starring Adam Scott, Taylor Schilling and Jason Schwartzman. For more information, please visit: 1091pictures.com

The post New Documentary With Philly Roots Is An Ode To Being At The Ballpark Just In Time For Baseball Season first appeared on Reality Syndicate Viewers.