Street Volkswagen of Amarillo’s Marketing Director, David Meraz named a ‘Citizens on the Move: 40 Under 40’ Recipient 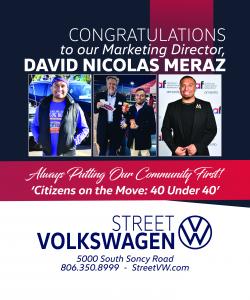 Street Volkswagen of Amarillo’s Marketing Director, David Meraz is one of 40 recipients for the Amarillo Globe News’ Citizens on the Move: 40 Under 40

I’m lucky to work for a great company and John Luciano who allow me to do so much for our community and I believe that we really do make sure to put our customers and community first.”

AMARILLO, TEXAS, USA, April 8, 2022 /EINPresswire.com/ — Street Volkswagen of Amarillo’s Marketing Director, David Meraz has been named 1 of 40 recipients for this years ‘Citizens on the Move: 40 Under 40’ presented by the Amarillo Globe News and FirstBank Southwest in Amarillo, Texas. According to AGN, the Citizens on the Move: 40 Under 40 Business Professional awards were added in 2018 to honor younger people who are making a difference in the community.

“We are extremely proud of David and everything he does for our community,” Street Volkswagen of Amarillo Owner and General Manager, John Luciano said. “It’s no surprise that he can now add this award to the long list of awards he’s received over the years, he’s doing a great job both here and in our community.”

David has been with Street Volkswagen since the company opened in 2013. He is one of the five original remaining employees who helped bring the Volkswagen brand back to Amarillo. In addition to his work at Street Volkswagen, David is heavily involved with the American Advertising Federation, Family Support Services and United Way of Amarillo & Canyon.

“I am honored to receive this award,” Meraz said. “I’m lucky to work for a great company and John Luciano who allow me to do so much for our community and I believe that we really do make sure to put our customers and community first.”

David’s past awards include being named Los Barrios de Amarillo ‘Man of the Year’ in 2016, a recipient of the Amarillo Chamber of Commerce ‘Top 20 Under 40’ Award winner in 2016 , a ‘Rising Star’ from the Department of Communication at WTAMU in 2016, UWAC’s ‘Loaned Executive of Year’ in 2015, and ‘Outstanding Member’ from AAF-Amarillo in 2019. He most recently won three ADDYs in the local round of the American Advertising Awards in Amarillo, Texas.

Street Volkswagen of Amarillo opened in Amarillo, Texas in 2013 and has since been a valuable corporate citizen in the Texas Panhandle. They provide support to area nonprofit organizations such as Family Support Services, Young Life, United Way, the High Plains Food Bank, AAF-Amarillo, the Chamber of Commerce, the Hispanic Chamber of Commerce, West Texas A&M University and many other organizations. For more information on Street Volkswagen of Amarillo please visit their website at www.streetvw.com or call them at 806.350.8999