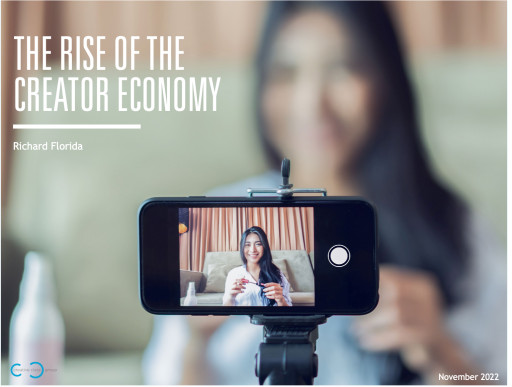 New Report on the Creator Economy
By Professor Richard Florida

A new report titled "The Rise of the Creator Economy" offers the most comprehensive view to date of the world of digital creators, including how to define their work, size the economic movement they're propelling and understand the motivations, challenges and opportunities supporting their growth and the global economy at large.

The report, commissioned by Meta, charts the evolutionary outgrowth of the larger Creative Economy, as the rising class of creators shifts the balance of power from large corporations to creative talent. This includes its scope, broader economic impact, and what's driving individual creators -- which Florida defines as those "who use digital technology to make and publish unique creative content audiences can access and respond to," with the ability to monetize their efforts in various ways.

Accelerating this process are online digital platforms, offering creators direct access to creative production and marketplaces in which they can monetize their work, as well as the increase in flexible and remote work. Florida sees this shift as the "most profound economic and social transformation since the Industrial Revolution." Key analyses from the report include:

"A new and more robust social compact for Creators is important not just for Creators and the Creator Economy, but for our economy and society writ large," Florida writes. "Our economy's ability to grow and deliver rising living standards hinges on innovation and creativity—and not just of the few, but of the many."

The Creator Economy is not just a new and important source of economic growth, it is a source of meaning and purpose for millions upon millions of people. In a world where people are becoming increasingly and dangerously isolated, it provides a sense of community. "For all those reasons and more," Florida says, "we need to stoke the creative furnace that lies deep within every human being."

"The Rise of the Creator Economy" report was conducted by Richard Florida, author of the best-selling book, The Rise of the Creative Class, and the Creative Class Group. Informed by interviews with key Creator Economy stakeholders, including platform executives, academics and thought leaders and prominent creators, the report also synthesizes more than 75 published studies on the topic. Florida and his team intend to develop new data and further scope the Creator Economy in future phases of research. To access the full findings of the report, visit here.

About the Creative Class Group